Travel by Ship: A Guide to the Earth's Bodies of Water 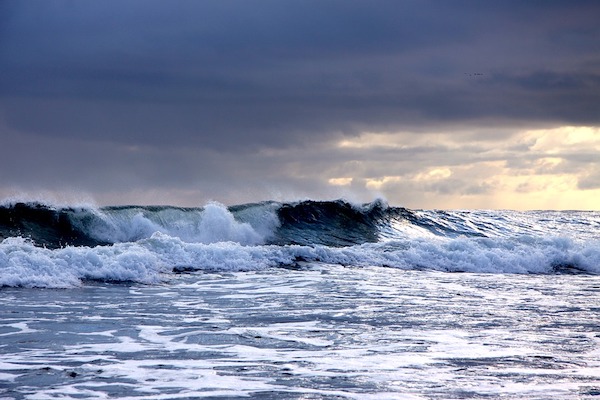 A majority of Earth's surface, or approximately 71 percent of it, is covered by water. Water is a necessary substance that helps to sustain nearly all human, animal, and plant life on the planet. The most obvious and visible sources of water are the oceans, rivers, and lakes, but water can be found in more places than these. Water is also found in the air, ground, and ice caps. It is constantly moving and changing form as it goes through the water cycle. During this cycle, the sun heats water, causing it to evaporate into water vapor. This vapor rises, and the cold air causes it to condense and form into clouds, which then turn into precipitation such as rain or snow. The snow melts and turns into water, and the water from rain and melted snow runs into bodies of water or seeps into the ground. The groundwater hydrates plants or is stored deep in the ground until it eventually reaches the ocean and the cycle starts over again.

Oceans are deep bodies of water that cover a large portion of Earth's surface and contain approximately 97 percent of the planet's water supply. The world's oceans are all part of one vast expanse of saltwater that's divided into four or five areas. The four globally recognized oceans are the Arctic, Atlantic, Indian, and Pacific oceans. The Southern Ocean was named in 2000, and many nations, including the United States, now recognize it as the fifth ocean. A majority of the plants and animals on Earth call the ocean home. Humans and other animals depend on it and use it as a source of food. The oceans are also a leading force in shaping weather both at sea and on land; it is there that major storms like hurricanes develop. Oceans regulate Earth's overall climate by storing heat from the sun and distributing it around the planet through a network of global currents. These currents move clockwise in the Northern Hemisphere and counterclockwise in the Southern Hemisphere. The world's oceans have a significant influence on which areas receive a lot of snow or rain and which areas have persistent deserts. In modern times, they have also become a major conduit for global travel and commerce, as myriad ships cross these bodies of water every year to move people and goods around the world.

The world's seas are large bodies of water that are not as big as the oceans but are partially surrounded by land and lead out into the ocean. The term "seas" has also been used as a synonym for the world's collective oceans in many cultures and by the United Nations Convention of the Law of the Sea. While seas are smaller than oceans, they are larger than lakes; however, like oceans, they contain saltwater and are not hospitable for freshwater marine life. Some well-known seas include the Aegean Sea, Mediterranean Sea, Caribbean Sea, Arabian Sea, and Bering Sea. Some seas are inland and are called epeiric seas. Epeiric seas are typically more shallow bodies of water that do not flow out to open oceans, and they are brackish, which means they contain saltwater but not in as high of a concentration as regular seas or oceans. Examples of inland seas include the Baltic Sea, the Seto Inland Sea, and the Caspian Sea, the world's largest inland sea.

A lake is a body of water that is enclosed entirely by land. Lakes are major sources of freshwater, though some lakes, such as the Great Salt Lake in Utah, are an exception to this rule. Lakes form in various ways, such as natural dams, glaciers carving basins into the land, when Earth's tectonic plates create basins, or when volcanoes erupt and then collapse, leaving volcanic craters. In some cases, like that of Lake Mead in Nevada, lakes can be man-made as well. In all of these cases, the resulting areas are eventually filled by rivers or streams, melting glaciers, groundwater seepage, or precipitation such as snow or rain. Lakes vary greatly in size, from the size of shallow ponds to the Great Lakes between the United States and Canada, Lake Victoria in Africa, or the very deep Lake Baikal in Russia. Water typically flows into and out of lakes through rivers; closed lakes that do not drain into rivers will become saltwater bodies.

Large flowing bodies of freshwater that move across the land are called rivers. They can originate from rain, snow-capped mountains, melting glaciers, or lakes. The area where a river starts is called its source, and where it ends is called its mouth. Rivers can carve deeply into rock and soil, creating canyons, rapids, and deep river beds, as they meander toward lakes, bays, gulfs, seas, or the oceans. There are countless rivers around the world, but some of the major ones include the Tigris, Euphrates, and Ganges rivers in Asia, the Mississippi River in North America, the Amazon River in South America, and the Nile in Africa. Rivers move soil and deposit it along its banks and move freshwater across landmasses while also providing a habitat for many forms of animal and plant life. Human civilizations have relied heavily upon rivers, such as Mesopotamia, which was founded along the Tigris and Euphrates, and Egypt, which thrived along the Nile. Creeks and streams are similar to rivers, except they are not as broad or deep. For human civilizations, rivers provide water for drinking and agriculture, and since the dawn of civilization, they have been a critical path for the transportation of goods and the migration of people. In modern times, humans also harness the flow of rivers with dams to produce hydroelectric power.

A gulf is a coastal part of a sea or an ocean that is surrounded in part by land. Some examples include the Persian Gulf, Gulf of Guinea, Gulf of Mexico, and Gulf of Alaska. Gulfs may have an impact on ocean currents and regional weather patterns; for instance, the Gulf of Mexico is the source of the Gulf Stream, one of the world's most significant ocean currents, and some hurricanes that develop in the ocean will gather strength in its warm waters. Gulfs differ from bays in that they are typically much larger, and bays may connect to lakes as well as oceans. But have historically been highly useful as harbors for ocean-going traffic. Major bays include the Bay of Bengal, Chesapeake Bay, and Hudson Bay.