Cyclones, Typhoons, and Hurricanes, oh my! The Dangers of Sailing on Open Waters 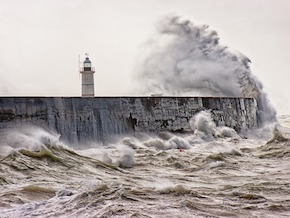 Sailing on the open sea can be exhilarating, but there can be a high degree of risk with a sailing adventure. The unknowns that await on a high seas excursion are many, from marine life to atmospheric conditions and storms that could impact the voyage. Monitoring oceanic conditions is a crucial part of sailing to help keep a vessel and its occupants safe. Whether sailing involves a cruise ship, a yacht, or a smaller sailboat, oceans demand respect from anyone venturing out onto the open waters.

How Storms at Sea Develop

Storms at sea might be called hurricanes, typhoons, or cyclones depending on their geographic location. These storm systems organize over areas of warm water, rotating around low-pressure areas. The warm water feeds the strength of these storms, enabling them to build huge amounts of energy. While it's possible to track hurricanes as they form and move over open water, rogue waves that are like massive walls of water can happen without warning. Rogue waves are more common in areas where strong currents generate, causing two wave crests to combine to make a single huge wave. Because this convergence happens quickly, use of radar won't usually give a vessel enough time to avoid a rogue wave.

Hurricanes that make landfall often cause significant damage, and a lot of this comes from the storm surge, which usually brings widespread flooding to coastal areas. Hurricanes also cause damage in the oceans themselves, impacting aquatic species and the ecosystems in place beneath the surface of the water. Just the addition of large amounts of fresh rainwater into the ocean water is often enough to disrupt fragile ecosystems. Coral reefs are often damaged by waves and debris. Vessels moored along a coast will need to be anchored securely and prepared to withstand a storm before it hits. Removing all equipment possible will be crucial, including taking down sails, cushions, and dinghies so these items don't wash or blow away. Anything that can't be removed will need to be tied down securely. Boat owners also need to seal all openings to make vessels as watertight as possible. On the open sea, a vessel can experience significant damage from a storm. Waves can cause a boat to be rolled or knocked down. This can be especially likely if a boat is not positioned perpendicular to a wave. A wave hitting a boat broadside can overcome the vessel, making it impossible for the boat to right itself. The design of a vessel can make it more or less likely to roll in a storm, affecting its center of gravity, buoyancy, and ultimately its righting ability.

Actions to Take in a Storm

Being caught in heavy weather at sea tends to be a frightening experience. Sailors must monitor the weather vigilantly to avoid storms. Lighter vessels typically fare worse in severe weather because cargo weight adds stability to help withstand waves. Heading for land is often the best course of action. However, a vessel caught in a port that offers inadequate protection when a storm makes landfall can also be in peril. Facing a storm at sea involves trying to keep to the "low side" of the storm, where the seas are calmest, and trying to keep as much distance as possible from other vessels, reefs, and coastlines while steering the bow into the waves to avoid a rollover. Before the storm strikes, be sure to secure all gear, pump bilges, turn on all navigation lights, and prepare emergency equipment.

During a storm, lightning is a serious threat for people in open boats. Passengers should wear shoes with rubber soles, and they should stay away from metal items such as ladders, large railings, and radio antennae. Use of a sea anchor can help keep a boat's bow facing into the wind, and safety harnesses and lifelines are crucial for keeping people from falling overboard.